I’ve go to start with the impressive storm that moved along the top of the range yesterday afternoon and gave over 50mm of rain to some locations. Here’s how it looked on radar:

And here’s the impact on the mountain road:

Screen grab is from a video on the Dorrigo Mountain weather page on Facebook, taken by Toni Bourne – looks like the storm nailed that catchment, but was very localised. But that storm yesterday is not the end of the rain by a long shot…

Here’s how the forecast appears for the coming week – you can see repeated pools of cold air moving up, and combining at times with onshore winds from a warmer than average ocean:

One of these images in particular looks really wet to me – onshore flow combining with an inland surface and upper low:

That combo can bring some really wet weather to the east coast, and we’ll likely see that happening over the next few days. Exactly who will see the wettest weather is still up for grabs, with the focus initially looking to be well to the south – but has been moving north over recent model runs. As an example here’s the last 4 runs from the GFS model for the same forecast time period – you can see the focus of the wetter weather moving further north with each run:

What does that mean? It means that models are still settling on an outcome, but that the risk of heavier rain across NE NSW has increased over the last few days. Here’s the 5 day totals from a range of models – and you can see heavier totals are looking possible:

What does that tell us? That models are all over the place with where the heaviest totals will be – but agree that there will be some heavy falls across NE NSW and that most locations look like seeing some decent totals. Looking even further ahead and out to 15 days and models are showing these sort of totals:

There are no guarantees that we will see these totals – but are an indication that further wet spells are certainly possible – classic La Nina weather. It’s therefore worth being aware that the rain totals are looking to be heading higher, and if they come off as forecast by some models we could see some local flooding. The last local Flood Watch from the BoM was a little unexpected, as the system (and the majority of the moisture) was moving in from the north and west and the range normally shields us from the worst of the rain…this time however we’re likely to see more of the moisture moving in from the ocean, and that increases the risk for us on the east of the divide – so I wouldn’t be surprised to see another Flood Watch at some point. Nothing to panic about for now, but worth being aware of what could be coming up….I’ll post again as we head into the weekend with more details.

Looking further ahead and the La Nina is really kicking into gear. The average 45 day rain forecast looks like this – again this is not a definite forecast but an indication that some really wet weather is possible over the coming months. This total is from the European model and shows and average from 50 forecasts:

La Nina will be with us through summer, with wetter than average conditions likely to continue, before a (likely welcome) switch to drier conditions as we head into winter. Take care out there! 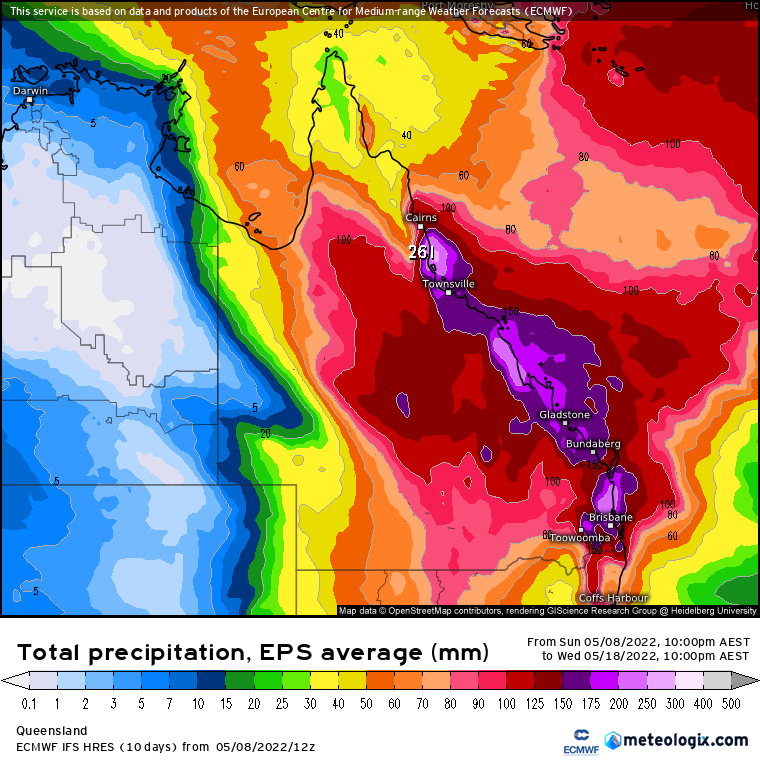